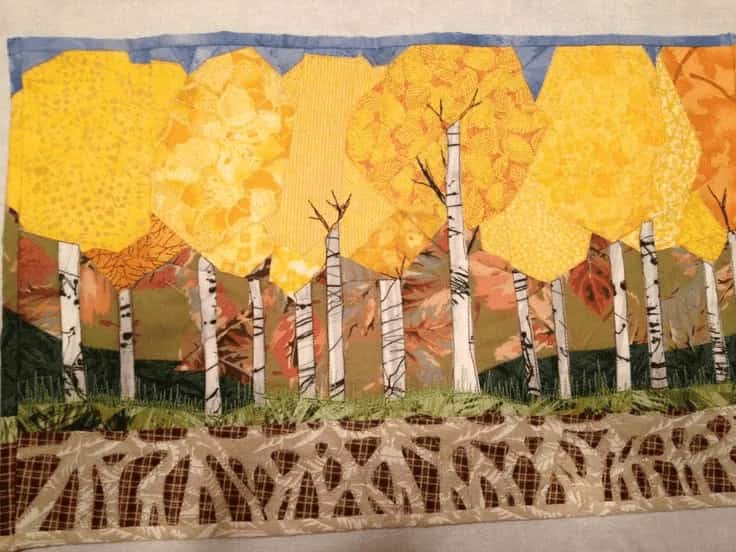 Think of a tree and what comes to mind probably has some leaves, some roots, and a trunk. The Quaking Aspen regularly reproduces via a process called suckering. An individual stem can send out lateral roots that, under the right conditions, send up other erect stems; from all above-ground appearances the new stems look just like individual trees. The process is repeated until a whole stand, of what appear to be individual trees, forms. This collection of multiple stems, called ramets, all form one, single, genetic individual, usually termed a clone.

But not all trees follow that formula. Some form what are called clonal groves: swaths of forest connected underground by a single network of roots, with each trunk genetically identical to the others.

The most famous example of a clonal grove is Pando, a grove of quaking aspen in Utah’s Fishlake National Forest. This entire forest, possibly over 80,000 years old, in Utah that is made up of ONE single tree with ONE massive underground root system is called a Quaking Aspen. It’s also the heaviest known organism, weighing over 6600/tons.

Its name means “I spread” in Latin, and for good reason. Pando is among the largest and oldest organisms on Earth. Its 47,000 stems cover more than 100 acres. It’s tricky to tell exactly how long Pando has been around, since the individual trunks only live up to 100 or 150 years.

Scientists have sequenced the genome of a couple dozen shoots of Pando and confirmed the main swath really is a clone, with very closely related but not quite identical trees surrounding Pando proper.

Clonal aspens like Pando can reproduce the traditional way, but they aren’t as good at it. That’s because they have three sets of chromosomes instead of the usual two. So when conditions aren’t perfect, they stick to sending up new shoots from the mass of roots under the grove.

Pando has survived this way for a long time, but scientists are worried it may not be able to clone itself quickly enough to stay alive in the future. They’ve noticed that most of the aspen trunks are relatively old and when new shoots do develop, they don’t last long enough to become full-fledged trees.

Scientists have a couple of theories why that is, but one of the most common is that deer and other animals nibble away at the shoots before they grow old and thick enough to protect themselves. In response, sections of Pando have been fenced off. Deer still sometimes sneak in, but in places where the fence is well-maintained, young shoots inside the fence are doing better.